Bee finds herself in another world where she has to do things in order to rescue Puppycat from something. Her journey takes her through many places, and Bee learns some new things about herself. 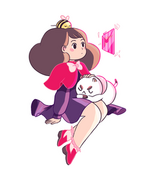 Bee
Add a photo to this gallery
Retrieved from "https://ideas.fandom.com/wiki/Bee_and_Puppycat:_Bee%27s_Quest?oldid=504826"
Community content is available under CC-BY-SA unless otherwise noted.