In the film, Sherman is stolen by a toy collector, prompting Jimmy Neutron and his friends to vow to rescue him, but Sherman is then tempted by the idea of immortality in a museum.

Jimmy, Sherman, and their friends are back as 10 year old Trent heads off to Camp Wauwanakua, leaving his toys to their own devices. Things shift into high gear when an obsessive toy collector name Evan Worthington, the son of the owner of Worthington's Toy Stadium, kidnaps Sherman. At the Worthingtons' apartment, Sherman discovers that he is a highly valued collectible from a 1990's TV show called "Nicktoons Roundup." He meets the other prized toys from the show: Penny Peterson , Cindy Vortex, Libby Fulfax, Sheen Eztavez, Carl Wheezer, the PS118 students, Gompers the goat, and Goten the Prospector. Trent's toys mount a daring rescue mission, Jimmy Neutron meets his match, and when he is tempted by the idea of lasting forever in a museum, Sherman has to decide where he and his heart truly belong.

Trent Cooper prepares to go to Camp Wauwanakua with his favorite toy, Sherman Peabody, but while playing with Sherman and the toys, he accidentally tears Sherman's arm. Trent's dad puts Sherman on a shelf, and Trent leaves without Sherman. The next day after Sherman has a nightmare of being thrown away, he finds a squeeze toy named Steven Universe who has been shelved for months due to a broken squeaker. Trent's uncle, Uncle Dwayne Sr. puts Steven in a yard sale. Thankfully, Sherman bravely rescues him, only to be stolen by a greedy young toy collector, who takes him to his apartment, thus stealing him. Meanwhile, Jimmy Neutron and the rest of Trent's toys identify the thief from a commercial to be Evan Worthington, son of Mr. Worthington, the owner of Worthington's Toy Stadium, a toy store that's suffering a closing and being replaced by a Wal-Mart superstore in the next few days. Jimmy recruits his friends, Mabel Pines, Toothless, Gene Belcher, Mark Pines, Danny Fenton, the Loud siblings, Gumball Watterson, Dani Phantom and SpongeBob SquarePants and they set out to rescue Sherman.

At the Worthington family apartment, Sherman learns that he is based on a 1980s television show called Nicktoons Roundup, and that along with the other Roundup toys – Penny Peterson, Cindy Vortex, Libby Fulfax, Gompers the Goat, Sheen Estevez, Carl Wheezer, Carl Lewis, Mason Nadir, the PS118 students and Son Goten the Idiot Prospector– he is set to be sold to a toy museum in Tokyo, Japan. While the others are excited about going, Sherman intends to return home to Trent. Son Goten explains that the museum is only interested in the collection if it is complete, and without Sherman, they will be returned to storage.

When Sherman's arm is torn off completely, Sherman, with the help from some of the other Roundup members, attempts to retrieve it and escape, but is foiled when Evan's television set turns on, and blames Cindy when he finds the TV remote in front of her case. In all the commotion, some of the Roundup toys sneak out to help Jimmy and the search party. The next day, Sherman's arm is fixed by a toy repair specialist named Vlad Masters and he learns that Cindy once belonged to a girl named Josee, who eventually outgrew her and gave her away to charity. Son Goten warns Sherman that the same fate awaits him when Trent grows up, whereas he will last forever in the museum. Sherman decides to stay, now believing that all toys will eventually get discarded by their owners.

Meanwhile, Jimmy and the other toys, along with Ford Pines reach Worthington's Toy Stadium. While searching for Sherman, Jimmy is imprisoned by a Utility Belt Jimmy Neutron, who believes that Jimmy is a rogue CIA Apprentice; he joins the other toys, who mistake him for Trent's Jimmy. After discovering Evan's plan, they go to his apartment, while Trent's Jimmy escapes and pursues them, accidentally freeing a Dark Danny toy, who follows him with the intent of destroying him. After the toys finally find Sherman, Jimmy rejoins them and proves that he is Trent's Jimmy by lifting up his shoe, where Trent's signature is written, but Sherman refuses to go home and intends to go to Tokyo.

Jimmy reminds Sherman that a toy's true purpose is to be played with, which he would never experience in a museum. After seeing a boy play with him on television, Sherman immediately realizes that Jimmy was right, and asks the Roundup gang to come home with him and Trent's old toys. However, Son Goten declines and stops them from leaving, revealing that he wants to go to the museum to be appreciated forever, having never been sold or played with. He was also the one responsible for foiling Sherman's earlier escape attempt and framing Cindy for it. Evan then returns, takes the gang in a suitcase and leaves with his father for the airport.

Trent's toys then chooses to remain behind with Dark Danny, who has revealed himself as Danny Fenton. Accompanied by Ed, Edd, and Eddy, Trent's toys steal a Dave and Buster's delivery truck and follow Evan and her dad to the airport, where they enter inside and approach the baggage handling system and find Evan's suitcase. Meanwhile, Evan admits the truth to his dad why he wanted to save the family company, and that led to Mr. Worthington to understand, but he still discussed the matter of his son's punishment. Son Goten rips Sherman's arm during a struggle, but Trent's toys stuff him into a little girl's backpack. They free Gompers and the other Roundup members, only for Cindy to end up on the plane bound for Japan. Assisted by Jimmy, Gompers, Danny, Mark, Luna Loud, Lori Loud, Harold, and Helga, Sherman frees Cindy, and the toys find their way home.

When Trent and his friends return from camp, Trent accepts Cindy, Penny, Gompers, the other Roundup Gang members, and the Edds as his new toys, thinking that his parents bought them and repairs Sherman's torn arm. Evan's father's business has suffered due to him failing to sell the Roundup gang; Evan is grounded for what he did, which means no burritos, no allowance and no electronics, and the company is being replaced with a Wal-Mart superstore, while Steven's squeaker has also been fixed. Sherman tells Jimmy that he is no longer worried about Trent outgrowing him because, when he eventually does, they will still have each other for company. 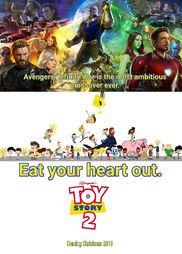 Infinity War, eat your heart out. 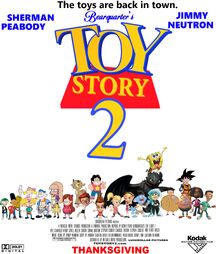 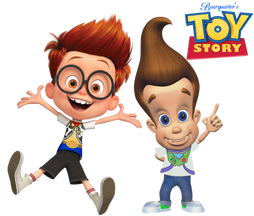 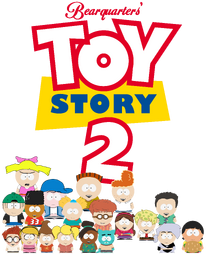 Retrieved from "https://ideas.fandom.com/wiki/Bearquarter%27s_Toy_Story_2?oldid=1875715"
Community content is available under CC-BY-SA unless otherwise noted.