Asriel Dreamer: Greenhorn
Written by
BetaRain
Screenplay by
BetaRain
Based on
Undertale and Team Fortress 2
Edited by
BetaRain
Music by
Skillet

Asriel Dreamer: Greenhorn (also known in YouTube as Asriel Dreemurr: Greenhorn and in Steam as [SFM] The College Greenhorn) is an upcoming Source Filmmaker buddy-comedy adventure musical family fantasy romance film that will be made by BetaRain. It will be his first feature film. It is set for a 2017 release date (along with his first short film Siberian Hitman: Coldfront).

Asriel is finally a full-grown teenager and he prepares for college. When he arrives, it's everything he ever wanted. His first days go well, but when he meets the toughest, yet coolest guys around, they must unite for the annual Games of Pure Extreme! before a bully and his gang of “bad kids” take the trophy and claim all the victory.

Early development for a Source Filmmaker motion picture based on Asriel Dreemurr from the 2015 RPG game Undertale began with a post on Reddit by BetaRain28 stating that inspiration was sparked by two images of Asriel himself. Then, on the same day, the title of the movie, as well as the idea of the story, was revealed in the next reddit post.

There is 13 working titles of the film that never made it to be the official of it:

To follow the unused working titles, there are three unused story ideas that never made it to the final version during production: 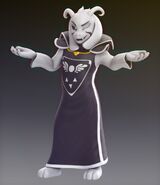 Promotional picture of Asriel.
Add a photo to this gallery

Retrieved from "https://ideas.fandom.com/wiki/Asriel_Dreamer:_Greenhorn_(2017_film)?oldid=2148767"
Community content is available under CC-BY-SA unless otherwise noted.