Arlene is a 1999 traditional animated film based off of the best-selling graphic novel by Robert Nadal. The film was Nickelodeon’s first original animated feature and the second animated movie they’ve released. The film starred Brittany Murphy as the title character and is her first role in an animated movie.

Over a thousand years ago, an apocalyptic event occurred in a galaxy far far away. As it was all being destroyed, a group of 5 split up and went their separate ways. Two of them head for a planet called Earth. For years, they’ve protected the planet from all sorts of meteors and comets. These two were named Tiberius and Trevor, representing the brains and agility of they’re group respectively. Their group was known as the “Galactic Comets”

The 5 members of the Galactic Comets each represent one different skill. Intelligence, Resilience, Strength, Assistance, and Leadership. The group would eventually split up after the destruction of their home. With Tiberius and Trevor, they’ve been in search of a planet with life to protect from turning into what’s become or their home.

Tiberius looks over Earth with a feeling of hope it would live on forever. Trevor asked if Tiberius was feeling ok. He tells him he’s fine. He’s just looking over the majestic planet known as Earth. Trevor believes it’s a place like no other world. Kind of reminds them of their home. He starts to get a feeling that Earth might eventually go down the path their home went through. But Tiberius claims as long as there’s no sign of creatures or catastrophes, it’ll be ok.

As we start to delve down to Earth, we take a look at an island under the name, Tawaho. The island is home to various hills, mountains, and meadows. A place where you just can’t help but feel happy. There is also a small city named DiamondVille, and a giant blue castle outside of the city. Other than those 2 structures, there is also an animal farm with Sheep, Pigs, Cows, Horses, Chickens, etc. But, one night. Something spontaneous and disastrous happened. A giant 7 tentacled monstrous cephalopod ravaged the farm, scaring the animals and later eating them. Back with Tiberius and Trevor, word got out from an alarm and they hurried to take a look. Back at DiamondVille, thousands of citizens, including the mayor, Richard Weber, overheard the carnage and all ran to the farm to see what’s happening. When they see the monster, they backed up to prevent them from being discovered. The octopus, not looking where he’s aiming, spews out the animals bones towards them. Everyone is startled and frightened. As the octopus is done feasting, he disappears behind the mountains, never to be seen until next time. The citizens all wondered what they need to do. Weber suggest they all need to warn everyone, including the King of the, what they call, Drogans.

When Tiberius look over to the island and saw the monster, he was baffled and worried. Tiberius turned towards Trevor asking him if he noticed a monster near vicinity earlier. Trevor claims there were no signs of destructive creature or objects. Tiberius looked back over to the monster as it was finished with it’s dinner and went behind the mountains. Tiberius and Trevor wondered what they should do. Tiberius then got the idea of finishing his life work. A blueprint he made years ago. He’s gonna create a creature to go out there and stop the monster and protect the island. The problem is they don’t have the ingredients needed to form the creature’s DNA. Trevor suggest maybe Tiberius should go get the ingredients from Earth. Tiberius told Trevor he thinks he‘s crazy if he thinks Tiberius will go down there to get the ingredients. He says that based off of his past studying of Earth, the only location where he could get the necessary ingredients was on that island. Trevor sees his point. Trevor suggest they should draws straws to decide who will get the ingredients. No surprise, Trevor won the bet, so...Tiberius had to go risk his life to get the ingredients. Trevor promises if any happens, he’ll try to finish the plan for him. Tiberius takes his word for it and thanks him. He then goes into a mini rocket and heads down to Earth.

As the citizens of DiamondVille head for the castle to warn the Drogan king, Kyle, about the monster that ravage through the meadows killing thousands of animals. However, he wasn’t expecting any visitors, so they weren’t granted access so easily. Two drogan guards stopped them before they could enter. They say “Their royal majesty and his right-hand man are feasting on their midnight dinner. The citizens were all talk at one, telling them it’s urgent. The guards then asks what could be so important that they’ll need to go see the king. The mayor’s kid, Hoover, told them that there was a monster killing and eating almost all of the animals in the farm outside of town. We later take a look at Kyle and his right hand man, Deacon, as well as other drogans as they feast on dinner. Kyle then overhears a conversation outside the room. He calls in one of those guards to explain what’s going on out there. He explains that the citizens of DiamondVille need to warn him something. ”Warn me about what?“ he said. ”I’ll grant them access. Bring them in”. The guards let them pass. Kyle asks what’s on their mind. Mayor Weber explains there’s been a disturbance back at the farm. Some creature ravaged through and ate most of the animals on the farm grounds. Kyle seems intrigued and baffled. He asks why are they telling him all of this. The citizens says they wanted to warn him and see if he can do anything. Deacon, over-listening to their conversation comes up and asks, “Would the monster happen to look a thing like that?”, as he point to a fish tank with his pet octopus. Hoover stands up and says that that’s exactly what it looks like, except it was 5000 times it’s size. Richard gets a feeling he might be on to something. Deacon explains that they’re misunderstood. That not the monster, it’s just his pet octopus. He then adds the only thing it prefers to eat is shrimp. The drogans all talks among each others saying Deacon’s exactly right. Hoover starts wondering if he’s sure that’s it. Deacon turns his head towards Hoover, asking very deeply, “Are you questioning my words?”. Richard and his wife, Valerine, asks Deacon to back away from their son. Deacon, feeling threatened by their words, wondering if they’re on their sons side. Kyle breaks up the fight and just let it go. One girl, named Tiffany, stands up and asks Kyle if he knows what they need to do. Kyle turns towards her asking what‘s she’s talking about. She says that that monster could come back and maybe even go for DiamondVille. Is there anything anyone can do? Kyle takes a brief moment to ponder about what they’re saying. He comes to a conclusion saying the possibility of someone taking on that monster is unknown or irrelevant. Everyone gasped at his words, worried that he might be right. Tiffany shouts, “Isn’t there anything or anyone that could possibly stop that thing?” Deacon sarcastically adds, “What do you think? A hero is just gonna fall out of the sky or something?”. Surprisingly, no one notices a rocket falling down from the sky, so Deacon technically spoke too soon.

We cut to the rocket as it crashes near the edge of a cliff. Tiberius came out of the rocket through the bottom door, not realizing it was above the ground. He fell and toppled down the edges until he hit the bottom. But he was ok, luckily. He tried to pull himself together and get the required ingredients he needed to create his new creature. He disguised himself among the town and managed to claim all of the ingredients he needed. However, drogan watchdogs were looking over Diamondville and as they saw Tiberius as he snuck back out of DiamondVille and then removing his disguised when no one else was watching. This left the drogans a bit skeptical and concerned. This eventually got Deacon’s attention and then he went to take a look. He seems to have some sort of remembrance of his past involving Tiberius. He had a feeling Tiberius was up to something. He ordered a Drogan to follow him to capture Tiberius.

As Tiberius made sure no one else was looking, he was calling Trevor through telepathy to get him back into the ship. Deacon snuck behind a bush without Tiberius seeing him. Deacon realizes he’s on to something important. Listening to what Tiberius is saying, he eventually gets caught up with his plan. Deacon is baffled and worried Tiberius will expose him as the culprit. He then makes the decision, to get rid of him, before it’s too late. He pulls out a tranquilizer elixir and aims it at Tiberius, shoots it, and knocks him out cold. This was Deacon’s chance to take Tiberius and hide him away from anyone else's eyes. Word gets back at the ship, with security trackers losing track of Tiberius. Trevor is startled and regretful about what just happened. He then thinks the only possible thing left to do is finish Tiberius’s plan. He then activates an anti-gravity ray and manages to reclaim the ingredients Tiberius got to make the creature. Trevor inserts them into a tube and forms the DNA of the creature. Trevor looking at the DNA strand, looks at it thinking about his past. He swore he would finish Tiberius’s plans and make him proud. After the DNA finishes metamorphosing into it’s form, Trevor then sets targets for Tawaho island. He sends both the creature and himself to Tawaho island. Lets hope everything goes well 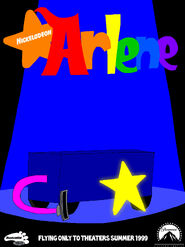 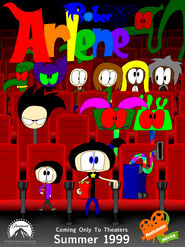 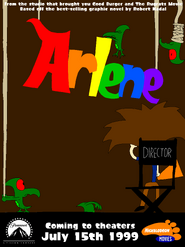 Arlene Movie Poster #3
Add a photo to this gallery
Retrieved from "https://ideas.fandom.com/wiki/Arlene?oldid=1921245"
Community content is available under CC-BY-SA unless otherwise noted.