Ariel is the protagonist of Disney's classic 1989 animated feature film, The Little Mermaid. She is the seventh and youngest daughter of King Triton, ruler of the undersea kingdom of Atlantica. She lived through much of her young life with a longstanding, yet forbidden, admiration of the human world, and longed to someday experience life upon the surface.

Ariel is based on the nameless protagonist of Hans Christian Andersen's Danish fairy tale "The Little Mermaid", yet she does not have a melancholy ending as in Andersen's tale.

Ariel is the fourth official member of the Disney Princess line-up.

She is voiced by Jodi Benson.

"Of course, I saved my world, especially with the use of the trident that I snatched to save Flounder. Wasn't it terrific?"

Ariel is a bright, spirited and headstrong mermaid with a strong passion for adventure and exploration. Her tendency to explore the more mysterious depths of the ocean (or more importantly, the world beyond the ocean) can lead to an array of problems to both herself, her friends, and in the confines of her personal life—as seen through her constant confrontations with her protective father, King Triton. Nevertheless, Ariel's selflessness, compassion, and intuitive way of thinking often resolve such problems, as she always takes full responsibility for her actions.

At the start of the original film, Ariel is shown to have a burning obsession with the human world, and a desire to learn more about their culture. Unlike her father, she views humans as aspiring creatures, astonished by their ability to constantly create, and heavily goes against the idea of them being "barbaric" and selfish as a result of this. This passion is revealed to have been prominent throughout Ariel's life years before the events of the film, as seen in the television series. By the point of the film, as shown through her lament, "Part of Your World", Ariel's obsession with the human world has reached unimaginable heights, as she spends most of her time focusing on finding, observing, and collecting various human objects that have sunk into the sea. Her obsession has also taken a toll on her emotionally, as the song begins with a sense of wonder and enchantment, ultimately climaxing in a soft end, filled with hopelessness and despair, representing Ariel's dying hopes of ever experiencing life upon the surface. These factors of desperation and despair are the prime motive behind Ariel's eventual deal with the sea witch, Ursula, to become human and experience the world above the surface.

Ariel is also shown to be extremely compassionate and loving towards almost all living things; more so platonically than romantically. This is most notably seen through her friendship with her closest companion, Flounder, and even her father's court composer, Sebastian who, despite being against Ariel's recklessness and overly adventurous nature, is given a considerably large amount of love and respect from the princess, which is often reciprocated. With Flounder, she is comforting and patient, as well as protective, with the tendency to risk her own life for the guppies on various occasions. Her ability to befriend all various creatures, be they an abandoned killer whale, an irrationally feared sea creature and even the son of one of her nemesis is displayed throughout the franchise. Before she met Eric, she was rarely interested in romantic relationships, not even with any of the merman princes that Triton tried to get her to marry. The only known exception was Prince Waverly of the Pacifica Kingdom, with whom she was infatuated. After meeting Eric, however, Ariel is revealed to be a romantic, willing to make daring sacrifices for the sake of true love. Her love for him is validated by Eric's returned selflessness and sacrificial actions for the sake of love; notably seen during the climax of the film.

Like her father, Ariel has a bad temper if ever she is provoked, although hers is not as bad as his. Although spirited, even she has had some degree of self-doubts about herself, as she actually at one point considered her father might have been correct and that she may have been a freak for having any fascination for humanity. She also had a degree of seeing the good in things, as she also doubted that humanity could have been pure evil from their tools and artworks.

Also, despite her usual naivety and impulsiveness, Ariel has shown on many occasions to be serious, careful, and very intelligent and intuitive.

In The Little Mermaid II: Return to the Sea, Ariel matures after becoming a mother. Due to the threat of Morgana, she becomes very overprotective of Melody in a similar manner to how she was treated by Triton in the first film. She is shown to long for the sea, but keeps this hidden from Melody for the latter's own safety; even though it would've been easier if she had explained everything to her, she even points this out in a later scene and at the film's climax. At one point, however, she does subtly allude to her true heritage as she mentioned to Melody when sympathizing with her about not fitting in that she was "a fish out of water", with Melody not quite believing her. Her most notable trait, however, was her deep love and fascination for humanity, having desired to become human during the events of the first film, even prior to meeting her future husband, Eric. She did not always have this trait, however: until she was 15 years of age, she expressed a deep fear of humanity similar to Triton's xenophobia of humanity, although her witnessing some humans saving a beached dolphin changed her views on the matter. Ironically, one of the people responsible for saving the dolphin was Eric, although she never knew it.

Ariel is a young mermaid teenager with a slim figure, fair skin, and large, deep aqua blue eyes. From childhood to her teenage years, she wore a lavender seashell bra. As a child, her lips were the same color as her skin and as a teenager, they are bright red. Ariel's most defining feature is her long, thick red hair. From the waist down, she has a green horizontal fish-like tail with sea green scales and light green fins. She most likely has the reproductive organs of a tropical fish. In Little Mermaid's Island, her seashell bra looks more like a strapless top that covers her belly.

When Ariel becomes a human, the only article of clothing she wore was her seashell bra but wears an old sail from a shipwreck with some rope to keep it closed, fashioned by her friend, Scuttle. Being prepared for dinner, she wears a pink and white gown, silver barrettes in her hair and pearl white earrings. Getting ready for bedtime, she wears a pink nightgown. After being taken in by Prince Eric, she wears a dress with long light blue sleeves, a dark blue bodice, and a blue shirt (sometimes white), along with black heels. She wears a big royal blue bow in her hair. After she's turned into a human once again, she wears a light blue glittering dress. After she kisses Eric, during their wedding, she wears a white wedding dress with a sparkling golden tiara on her veil. During and after her daughter Melody's christening, she wears a gold and white dress, and a low ponytail decorated with a white bow. She also wears a periwinkle gown with an up-do decorated with a golden tiara with green and white gems on her necklace and earrings during Melody's 12th birthday party with her hair being a bit shorter due to it being adjusted. She still wears the same up-do with a green peasant dress when she's on Eric's ship and a blue and white dress with light blue earrings in the song "Here on the Land and Sea" in the second movie. In one of the video games, she wears an aqua-colored gown with a matching flower on the side of her hair.

In Sofia The First The Floating Palace, Sofia's amulet summons Ariel and she tells Sofia that she still has a chance to save her mermaid friend, Oona by enlisting her big sister Cora to help by showing her that she cares about Oona as much as Cora does.

In her mermaid form, Ariel has a few abilities.

In one episode, Ariel briefly became a sea witch and learned how to use magic; she used her newfound talents to grant Sebastian's wish of being bigger but unfortunately, it continuously worked, making him continue to grow to the point where he surfaced while standing, and it was fueled by the light of the full moon. She lost her magic and status as a sea witch when she wished the whole entire mess never happened, and her magic did just that, erasing the entire event and influencing her so it wouldn't happen in the reset timeline. 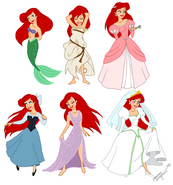 Ariel in her mermaid and human forms 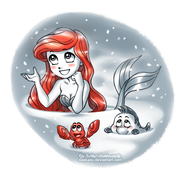 Ariel with Flounder and Sebastian 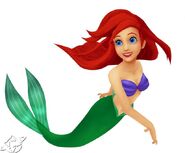 Pink dress with a twintail hairstyle

Retrieved from "https://ideas.fandom.com/wiki/Ariel?oldid=1613340"
Community content is available under CC-BY-SA unless otherwise noted.