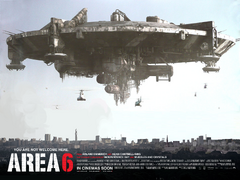 Area 6 is a 2018 British epic science fiction thriller film directed by Douglas Mackinnon from a screenplay by William Nicholson, produced by Adam Campbell-Sing and Douglas Rae, with Roland Emmerich (director of Independence Day and The Day After Tomorrow) serving as an executive producer. The film stars Rob Ostlere, Terry Notary, Frances Bishop, Phil Davis, and Ben Aldridge. This is also the first feature film production to have be produced by Sing's YouTube content creation company FamilySing Entertainment.

The film was ranked by many critics as the best film of 2018, as well as one of the greatest science fiction films of all time; acclaim went to its screenplay, action sequences, visual effects, musical score, art direction, and its overall narrative structure. It won multiple critical and guild awards, and was nominated for eight Academy Awards in 2019 including Best Picture and Best Original Score, and won six, including Best Adapted Screenplay, Best Visual Effects, Best Cinematography, Best Sound Editing, Best Sound Mixing and Best Editing.

The story, adapted from Alive in Edgbaston, a 2017 novel written by Sing, depicts humanity, immigration, xenophobia, domestic violence, and social segregation. The premise of Area 6 was loosely based upon various events in South Africa during the apartheid era. The film was produced for just US$10 million and shot on location in Birmingham, West Midlands, presenting fictional interviews, news footage, and video from surveillance cameras in a found footage format.

A viral marketing campaign began in 2017, while the theatrical trailer appeared in March 2018. Released by Paramount Pictures, the film opened in conventional and IMAX theatres on 11 May 2018, in North America and earned US$69 million in its opening weekend. Since then it has grossed a worldwide total of US$745 million, setting a new record for a film with a budget lower than US$100 Million.

Over 68 years ago, aliens made first contact with Earth. Humans waited for the hostile attack, or the giant advances in technology. Neither came. Instead, the aliens were androids, refugees, the last survivors of their home world. The creatures were set up in a makeshift home in England's Area 6 as the world's nations argued over what to do with them. The tensions between the aliens and the humans comes to a head when a human field operative, Pier Smit, contracts a mysterious virus that begins changing his DNA. Pier quickly becomes the most hunted man in the world, as well as the most valuable – he is the key to unlocking the secrets of cybernetic alien technology. Ostracized and friendless, there is only one place left for him to hide: Area 6.

Differences from Alive in Edgbaston

Roland Emmerich had planned to executive produce a science fiction film devised by Adam Campbell-Sing of Muddles & Crystals fame, having been fascinated by its scope, comedy, and overall surprise. Emmerich and Sing discussed pursuing numerous narrative scenarios and eventually chose to executive produce and produce, respectively, Area 6. They chose Douglas Mackinnon, who had previously done directing work on BBC television dramas such as Doctor Who and Line of Duty, as well as the 2006 sports drama The Flying Scotsman. Two-time Academy Award nominated screenwriter William Nicholson wrote the script from a story by Sing, who chose to film in Birmingham, West Midlands, and chose to revisit the world explored in his second novel Alive in Edgbaston, choosing characters from the book, events and concepts that he found interesting including the documentary style writing, staged interviews, alien designs, alien technology/mecha-suits, and the parallels to racial conflict and segregation, and fleshing out these elements for the planned feature film.

Bankside Films and Head Gear Films fully financed the production of the independent film, underwriting the negative cost. During August 2017, Bankside entered into a distribution deal with Paramount Pictures for North America, the United Kingdom, and China, whilst Bankside would handle sales within the remaining territories. Among other territories, Metropolitan Filmexport acquired rights for France, Filmax International for Spain, Constantin Film for Germany, Element Pictures Distribution for Ireland, Filmauro for Italy, Dutch FilmWorks for Belgium, the Netherlands, and Luxembourg, Nordisk Film for Denmark, Norway, and Sweden, and Transmission Films for Australia, and New Zealand.

Paramount Pictures launched a "Humans Only" marketing campaign to promote Area 6. Paramount's marketing team designed its promotional material to emulate the segregational billboards that appear throughout the film. Billboards, banners, posters, and stickers were thus designed with the theme in mind, and the material was spread across public places such as bus stops in various cities, including "humans only" signs in certain locations and providing toll-free numbers to report "non-human" activity. An estimated 33,000 phone calls were made to the toll-free numbers during a two-week period with 2,500 of them leaving voicemails with reports of alien sightings.

Promotional material was also presented at CinemaCon 2018, advertising the website A-6.com, which had an application presented by the fictional United International Congress (UIC). The website had a local alert system for Birmingham (the film's setting), news feeds, behavior recommendations, and rules and regulations. Other viral websites for the film were also launched, including an UIC website with a countdown timer for the film's release, an anti-MNU blog run by fictional alien character Leroy Jenkins, and an MNU-sponsored educational website.


Cite error: <ref> tags exist, but no <references/> tag was found
Retrieved from "https://ideas.fandom.com/wiki/Area_6?oldid=2003454"
Community content is available under CC-BY-SA unless otherwise noted.