Start a Wiki
Aqua Girl Action Squad is an American animated television special, serving as a spin-off to Aqua Teen Hunger Force, being created by Matt Maiellaro and Dave Willis. It is produced by Williams Street and aired on February 10, 2020 on Adult Swim.

Three teenage human girls named Darla, Frieda and Minnie who lived in another city and having reliable sources about their new undercover job, only Minnie understands her situation.

In early 2018, after the ATHF revival was postponed one year ago, Maiellaro is planned to make an ATHF spin-off special starring the gender-swapped versions of the show's main characters with a mix of "human being". Keith Crofford and Walter Newman serves as executive producers for the special, due to Mike Lazzo's retirement in December 2019. 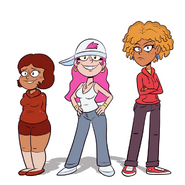 The concept designs of the Aqua Girls. 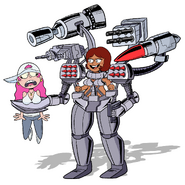 A concept of one scene where Minnie tries to destroy Darla with her "bra mech".
Add a photo to this gallery

The final designs of the Aqua Girls.

Minnie's exercise outfit.
Add a photo to this gallery

A screenshot of C. Martin Croker's tribute message at the end of the special.

A variant of the Williams Street logo.
Add a photo to this gallery

Retrieved from "https://ideas.fandom.com/wiki/Aqua_Girl_Action_Squad?oldid=2401974"
Community content is available under CC-BY-SA unless otherwise noted.