Annabelle "Anna" Sullivan is a 17-year-old girl who loves cartoons and the main female protagonist of Crossover Universe. She is voiced by Isabella Acres.

Anna is a 17-year-old girl with autism. She believed in magic and fairytales and she also loves cartoons from all over the Realms. She is also a trained apprentice that can use a spellbook so she can use her trained spell-casting skills. She was friends with Gumball Watterson, Steven Universe and any fictional character she meets.

Anna is a sweet, young girl who had autism. She's a bit cute and a little sarcastic sometimes. She was friends with her classmates at her current school, Strongfield High. But first, she was wealthy and self-trained. When she gets nervous, she runs away. Even thought she loves cartoons and hanging out with her friends.

She has blue eyes, blonde hair and pale skin. She wears a pink four-pointed star-shaped amulet necklace. She has a star-shaped tattoo on her left chest which is her birthmark. Her fashion motif was polka-dots, roses, diamonds, ribbons, etc.

She was voiced by Isabella Acres. In the younger version, She is voiced by Brooklynn Prince. 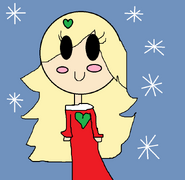 Her Christmas outfit in Annabelle's Christmas

Retrieved from "https://ideas.fandom.com/wiki/Annabelle_Sullivan?oldid=2566834"
Community content is available under CC-BY-SA unless otherwise noted.