Anais Watterson is a pink rabbit from The Amazing World of Gumball.

Anais is a small pink rabbit with a white tail. She resembles, and is smarter than her father, Richard, but she is much shorter in stature and has a more feminine appearance. The inside of her mouth is a darker pink, and her tongue is light pink. Her nose is red like her older brother Gumball. Anais usually wears an orange dress with a white trim and white socks. She is one of the only members of the Wattersons to wear footwear, along with Darwin and Granny Jojo.

In Season 2, her design changes. Her skin is a lighter pink and she is slightly taller and bigger, almost reaching Darwin because her head and body had increased in size.

She was seen in her pajamas in "The Curse," she wore a light blue dress with white trim and light blue socks with a dark blue spot. The second time she appears with pajamas is in "The Castle," but this time, they are pink footless pajamas with a white rabbit silhouette and she wears them barefoot. From this point forward, her pajamas always appear like this.

In Season 3, Anais' eyes are permanently round along with the rest of her family, although in one scene of the episode, "The Signature," and "The Compilation," she had oval eyes again.

Anais is by far the most intelligent member of her family, although her young age prevents her from really being noticed and taken seriously by adults. She has been shown on numerous occasions to have a knack for solving problems, such as when she figured a way out of the house when it flooded in "The Responsible," and the time she developed a complex solution to solve the problem of getting her grandmother's luggage up a flight of stairs in "The Kiss." Even though Anais is four years old, she attends Elmore Junior High because of her extremely high IQ; however, she is not in the same class as her brothers and instead goes to an eighth-grade class located elsewhere in the school. Anais is also a valued member of the school's Physics Club, and her vast knowledge of the subject has saved her from being vaporized by Bobert in his combat form in "The Club."

As shown in "The Remote" and in "The World," Anais knows how to sew, as she sewed up a hole in Daisy, and also sewed a zipper into Daisy. She also stitched up Daisy when Gumball And Darwin accidentally destroyed her in "The Detective."

Anais is a remarkably cunning strategist as well, revealed in the episode "The Remote," and "The Password," plotting elaborate schemes, and decoying everybody's perceptions to achieve her goal, though she is often underestimated due to her significantly young age, which she tends to use to her advantage.

Sometimes she is respected for her intelligence like in the episode "The Password," when Gumball says "Clever girl" after finding out about Anais' plan to hog the computer all to herself by once again by driving the Watterson family out of the house, similar to the episode "The Remote."

Anais can also be considered the most mature member of her family, aside from her mother. She often takes care of her brothers in many ways, like helping them with their homework, and making their breakfast, as said in "The Responsible." Due to her young age, however, she is prone to occasionally acting childish and still has stuffed animals.

Anais has shown some signs of having her mother's fiery temper. When her brother accidentally lost her doll, she was extremely upset and demanding, threatening to tell their mother what had happened. On another occasion, after finally taking Granny Jojo's bags upstairs, when asked to bring them down, she instead grew furious and kicked her suitcase out the window. Also, in "The Vacation," Richard hugged her to protect her, and she violently attacked him, thinking he was a monster. In "The Pest," Gumball and Darwin awoke from their sleep and found Anais violently and mercilessly attacking her stuffed animals because she was angry at Billy for bullying her at school, and even wanted to beat him up, showing that she can be just as angry and violent as her mother.

Even though Anais is very mature for her age, there are still some occasions where she reverts to childish behavior. She is a huge fan of Daisy the Donkey, as evidenced by her Daisy plush toy, and her extreme enthusiasm for the "Daisy on Ice" show. She also knows how to manipulate others by looking cute, as proven in "The Quest." In "The Gift," it is revealed that she believes in the legend of kissing a frog to get a prince.

In "The Friend," it is shown that Anais is very socially awkward. She states that she does not have any friends, which is why no one shows up at her party and in "The Egg" when she met Billy she had her thumbs under the table twisting them into knots. This awkwardness is shown again in "The Parasite" when she got really clingy to Jodie. This social awkwardness is also shown in "The Guy" when Josh and Anais first meet, when they yell at each other instead of talking. 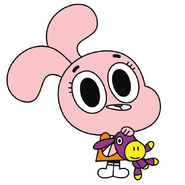 Add a photo to this gallery
Retrieved from "https://ideas.fandom.com/wiki/Anais_Watterson?oldid=1987146"
Community content is available under CC-BY-SA unless otherwise noted.