Amanda Céline Miller (born September 10, 1987) is an American voice actress, best known for her role as Boruto Uzumaki in Boruto: Naruto the Movie, Ride Mass in Mobile Suit Gundam: Iron-Blooded Orphans and Sailor Jupiter in the 2014 Viz Dub of Sailor Moon. In 2022, she will voice Sprucia Salvaje in the upcoming series Sprucia and Gilli and the franchise on Disney Channel. 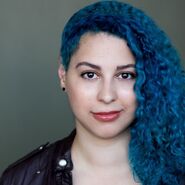 Add a photo to this gallery
Retrieved from "https://ideas.fandom.com/wiki/Amanda_C._Miller?oldid=2605025"
Community content is available under CC-BY-SA unless otherwise noted.