Agent Foxy and Pounce the Cat is an American animated action-spy-comedy television series, being created by Julianne Reilly. It was produced by Cartoon Network Studios and it aired on Cartoon Network from November 13th, 2008 until July 17th, 2014.

The series follows famous spy Agent Foxy and her partner Pounce the Cat as they deal with evil menaces and other foes.

See List of Agent Foxy and Pounce the Cat episodes. 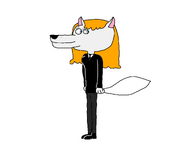 Agent Foxy.
Add a photo to this gallery

Retrieved from "https://ideas.fandom.com/wiki/Agent_Foxy_and_Pounce_the_Cat?oldid=2600703"
Community content is available under CC-BY-SA unless otherwise noted.